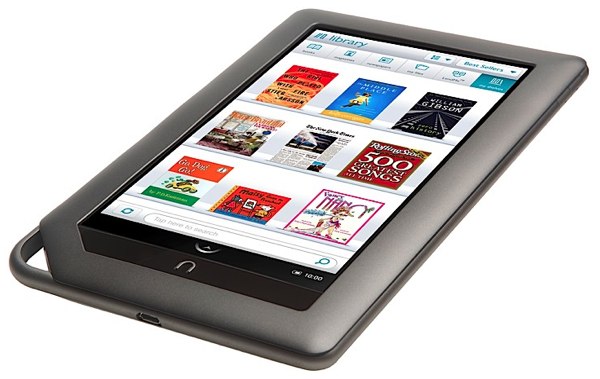 I sat on this since the beginning of the month,considering the likely impact. US bookseller Barnes & Noble announced the release of its’ tablet reader, the Nook tablet. Squarely aimed at the same market as Amazon’s Kindle Fire, the question is whether B&N can make any in-roads into this next segment of the e-reader market and whether anyone outside the US will care.

The Nook tablet is priced at $249, $50 more than the magically-priced $199 Kindle Fire. The Nook comes with double the storage (16GB) and double the RAM (1GB) and succeeds the Nook Color with a spec-sheet able to cope with HD video content on top of books and magazines.

Since it runs a modified version of Android supporting apps including Hulu, Netflix and Pandora, which the Kindle Fire doesn’t, this is all to the good. Sadly the Android Market is absent so access to apps is much more limited. Amazon’s cloud storage option is far stronger, no surprise there.

Both tablets are Wi-Fi only, with no 3G option. While the Nook Color and Nook Simple Touch get price cuts to compete with previous generation Kindle readers, the focus is always on the head of the product line, not the tail.

My suspicion is that the Nook tablet, attractive though it is, will only retain B&N’s share in the e-reader space, but only in the US. Will any other market get it? It’s going to take a lot more muscle to dent the Amazon behemoth’s market lead and it’s ability to garner publicity for its’ products. AJS