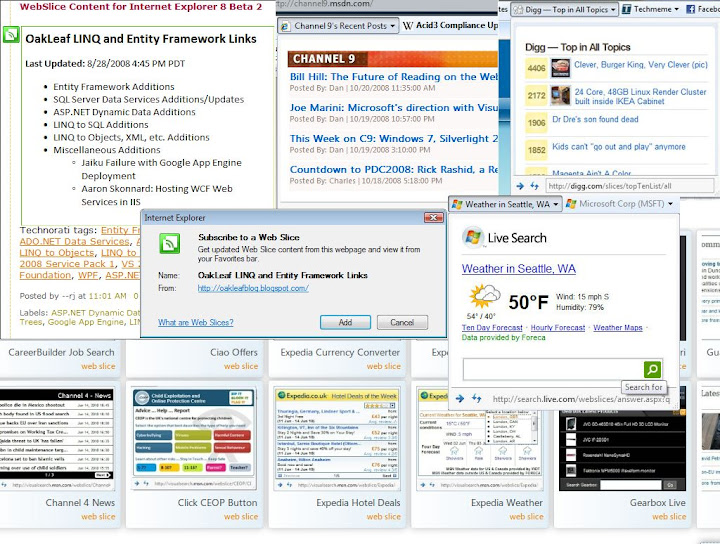 “A Web Slice is a specific portion of a web-page that you can subscribe to, and which enables you to see when updated content – such as the current temperature, or a changing auction price – is available from your favorite websites. Once you have subscribed to the Web Slice, it appears as a link on the Favorites bar. When the Web Slice is updated, the link on the Favorites bar will appear with bold formatting. You can then click the link to see the updated content.” Microsoft Web-Slices FAQ.

For example, you can view friend’s status from Facebook, Monitor E-bay items, track the trending items in Stumbleupon, get news headlines, updating weather forecasts and so on. The current gallery of Web Slices for IE8 onward is bundled into the page for IE Accelerators – you need to filter the page content for Web slices using the drop-list.  It features a few good Web Slices for Twitter, Google News and Gmail.

When a Web Slice is available on a web-page, you should  see the Web Slice button on the Command bar. The Web Slice button should (note should, in some cases it’s broken) also appear on the web-page next to the Slice-able content when you mouse-hover over it.

Microsoft provides a number of Web Slices itself: Hotmail, weather, traffic, finance, MSN headlines, and Channel 9 video (“Scorchio!” for the Fast Show fans). Functionally rich, the description and the explanation of how to use them leaves a lot to be desired and they don’t always work as advertised. A number of other media outlets, shopping sites and tech sites have released Web Slices, but not nearly enough. Many of these Slices are poorly repackaged RSS feeds.

Part of the problem is that Web Slices are a server-side technology. Dwight Silverman  summed it up:
“The problem with Web Slices is that they rely on the kindness of other sites – site operators have to establish them. A better implementation of the same idea is Safari’s Web Clips, which are only available on the Mac version of Apple’s browsers. There, the user creates the clip/slice, rather than the developer, which means any area of a site can be clipped.”

If you can find your way through the terse instructions on building Web Slices, you, as website administrator, have to build the Slice and make it available to visitors. There’s a further dilution of the idea as many of the Web Slices duplicate what’s available in an RSS feed anyway, since some 50% of users are not on IE browsers.

They should be all the rage, given the web services that have emerged since launch; a Google Calendar Web Slice could be very useful, yet alongside IE Accelerators, a browser-extension feature that works client-side, Web Slices look like a lame duck.

It may be just as well, imagine what your browser might look like if you actually subscribed to all those Web Slices, ‘toolbar hell’ all over again!

To those who say it takes time for developers to take advantage of new features – JavaScript took more than a decade to gain ubiquity – three years is enough time to conclude that since the launch alongside IE8 in 2008, Web Slices have failed to live up to their potential. Web Slices seem destined to follow features such as Active Desktop and Web TV for Windows into obscurity.

This is the difficulty of all these server-side features. What would be more more useful is the ability to drop a Web Slice onto the Windows 7 desktop as a gadget, thereby escaping IE altogether. Perhaps Live Tiles in Windows 8 Metro interface will be the evolutionary point at which Web Slices are realised. AJS

One thought on “Review: Whatever happened to Web Slices?”