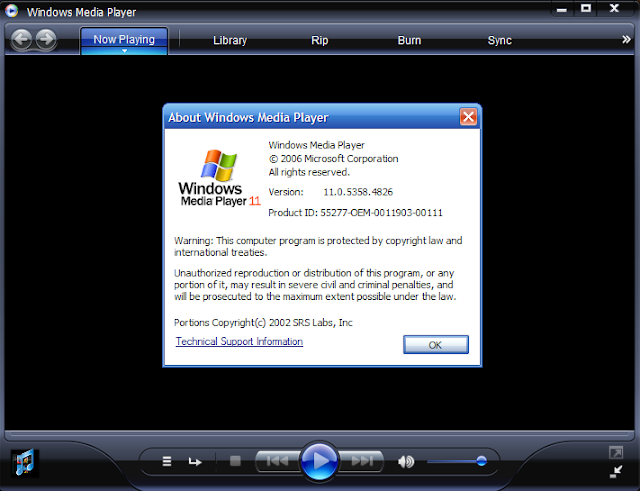 First, a disclaimer: the process described is for trouble-shooting purposes only. You should contact Microsoft to give them well-deserved grief if legitimately-licensed software does not properly validate.

For the first time in two years, I’ve had to rebuild my Windows XP machine (now virtualised) in order to keep running a couple of items of legacy software. Believe me two years is a good age for an XP install (about fourteen measured in dog years).

One problem; the luxury item of Windows Media Player 12 isn’t available for XP and 11 won’t play. The reason? WGA.

As far back as 2007, Microsoft’s anti-piracy measure known as Windows Genuine Advantage caused more trouble than it was worth. It was foisted on most of us through Windows Update and thrust its’ grubby tentacles deep into the Windows system software stack and I refused to have anything to do with it as, frankly, dealing with Microsoft for re-validation is a waste of my time and energy I can do without.

Unfortunately, separately upgradable items such as Internet Explorer 7 and Windows Media Player 11 came with their own WGA landmine inside.

However it is possible to install WMP 11 on Windows XP without requiring WGA validation (assuming you have WMP 9 or version 10 as a base for dll’s and codecs).

Download and Install: you can download version 11 from the Microsoft web site, or launch your existing version of WMP (9 or 10) and from the Tools menu, select Check for Updates. WMP will download a small 1Mb stub installer, to begin downloading WMP 11 proper.

When it finishes, you may get a notification that the installation failed. Don’t panic.

Bypass DLL’s: Most important, before you launch the new version of WMP, you need to rename the WGA dll file:

Launch WMP 11: You need to deliberately to fail WGA validation! Launch the new version of Windows Media Player and click the Validate button. It will fail, but the player will still work. Click the Finish button and continue to set up your new version of WMP.

It is possbile later Windows Updates may reactivate WGA, but since I am updating manually, I haven’t had an issue with this. AJS