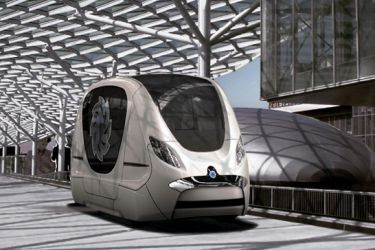 Masdar City is an eco-city of the future being built outside of Abu Dhabi in the United Arab Emirates. Masdar is a small city of 6 square kilometers designed to house 40,000 people, 1500 businesses around 50,000 commuters. Masdar’s solar farm is already the largest in the Middle East. The whole city was intended to be elevated, banishing traffic and services to ground level, clearing the streets for pedestrians, but that part of the design fell victim to the global recession and cost cuts.

Which makes life interesting for the other remarkable development of Masdar, the Personal Rapid Transit (PRT) Network, designed by Luca Guala of Systematica. Driver-less pod cars, overseen by Zagato and manufactured by Dutch firm 2getthere, carry between four and six passenger and are powered by solar-generated electricity. The lithium-phosphate batteries will run for 60km on a 1.5 hr charge. The maximum speed is a quoted 40km/hr.

It may not be, as claimed, the world’s first trackless PRT, those have been a practical reality for twenty years that I know. The pods can run the short point-to-point routes without collisions. The touted voice activation is also a work in progress.

The pods are parked at individual bays in a sleek station. A touch-screen kiosk allows passenger to summon them. The trackless, driver-less car is the very epitome of ‘future’ design, although the Masdar PRT is slightly less so. Running at around 20-25km/hr, it’s not exactly fast. Probably just as well, as the pods shake and rattle and bang like hollow fibreglass shells over golf carts, with the electric whine magnified as a result.

It’s not the most efficient or effective design, either. Instead of drawing power from the guide-way, the Masdar pods are battery powered vehicles that are heavier and more expensive than the tram-type, unpowered alternatives. This also limits the size of the PRT network and the frequency of vehicle use. Since the original plan for Masdar City in 2006, advances in electric vehicles has prompted a re-evaluation including buses, trams and a light rail network, so what role the PRT will play is in question. The timing of the Masdar development does it no favours, as many eco-features and futurist design elements have been compromised in this way by cost.

If you are travelling via the UK’s Heathrow Airport, you can see the a similar PRT POD-car system in action (maybe even ride on it, assuming it’s working on the day you’re there). I suspect Masdar chose this design because it was based on a working model. Not perfect, but at least it works.

Lets’ wait and see what Masdar’s transport system looks like in a few years when current austerity eases. AJS