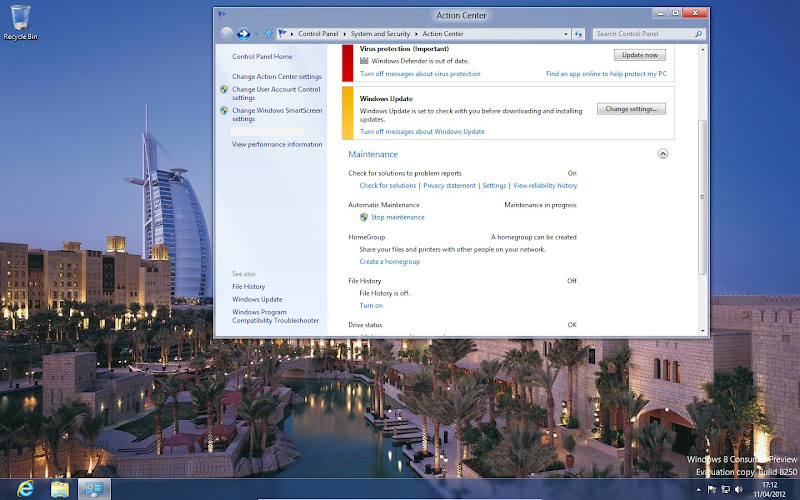 Yes, I am trying to beta-test the Windows 8 Consumer Preview amongst other tasks. Yes, I can run it as a virtual machine.

Stepping through the confusing mass of mis-information, Oracle VirtualBox 4.1.8 does support Windows 8 but there are issues, with many users experiencing Blue Screen of Death (BSOD) failures during installs and updates, while the integration tools also failed.

VirtualBox does offer the OS Types Windows 8 (32-bit) and Windows 8 (64-bit) and will make default setting selections for you.

It seems 4.1.8 is problematic for many VirtualBox users and the step up to 4.1.10 made things worse for another contingent, so for now, the advice is if 4.1.8 works for you, stick with it.

Generally, Windows is mostly working although I haven’t yet put it under stress in the virtual machine, whilst I try to get the best, stable setup.

You may find issues trying to install and run Windows 8 on VirtualBox. Virtual Machine Guest Additions are proving problematic, with 32-bit extensions for Windows 8 sometimes refusing to install the correct video driver. Mine is fine under VirtualBox 4.1.8, but 4.1.6 was a no-go, however I tried installing by several methods – by the menu, manually from the mounted .iso, manually using Windows 7 compatibility mode (as suggested by some users) and from the command line.

I wish there was some consistency, but it seems the Oracle team are at sea with each set of Windows 8 updates hitting the variety of host hardware we’re all running, so all I can do is express sympathy for them and us and see what Microsoft does with it this week.

For example, a lot of people trying to uninstall Guest Additions for device driver issues can throw the virtual machine into a boot loop – “Preparing Automatic Repair/Diagnosing Your PC/Attempting Repairs” and BSOD’s.

In particular, VirtualBox SATA drivers are causing BSOD, so default to IDE.

You may need to adjust settings for motherboard, processor and other features.

The base settings that appear to work most commonly are:

Display: Options don’t matter – leave them as is

A dynamically allocated HD less than 6GB will cause the install to fail saying not enough disk space.

Windows 8 Consumer Preview and Microsoft Virtual PC 2007
Note that this is not supported by Microsoft; running this Microsoft desktop virtualisation product on any Microsoft OS to test Windows 8 will fail. I’m guessing the MS-Virtual PC code base is just too old for Windows 8. C’est la vie…