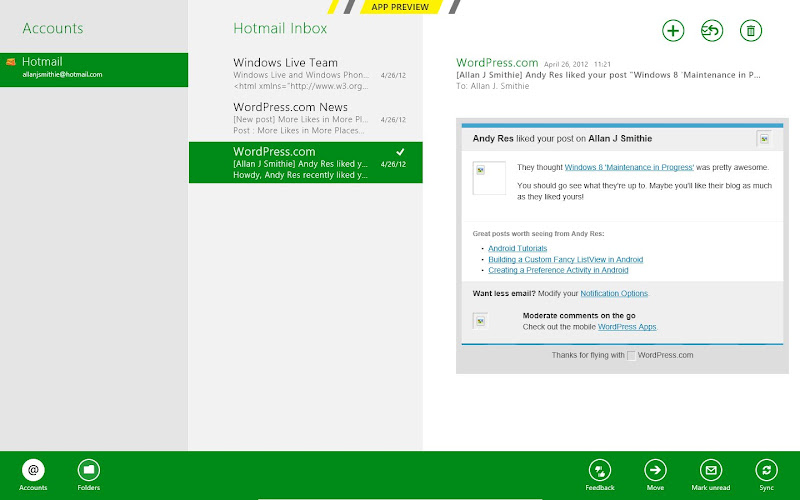 We’re still looking at the Windows 8 Consumer Preview, which now has the Metro interface and the new-style Metro apps. The one you’re likely to try first is the Metro Mail app.

This is an Email management app, somewhere between the Windows Live Essentials client, Windows LiveMail and the Mail app on Windows Phone. Services that can be integrated are Hotmail, Gmail, Exchange, Office 365 – and that’s currently it.

It’s an App Preview, so far there’s no POP or IMAP mail integration. That’s not the only limitation:

It’s problematic because this is clearly still in an early stage of development that looks like a proof-of-concept and that’s worrying because this is supposed to be a Beta release.

If you’re familiar with Windows Live Mail, that looks a lot like Outlook, with a familiar ribbon interface offering the full range of options for reading, sorting, and flagging e-mail. Windows 8 Metro Mail is far more basic. I configured the client with Hotmail and Yahoo and both accounts work fine from there. You just can’t do a lot right now; read, compose, move e-mails to folders, mark as unread, run basic searches through mail. There is rich-text html email and folder support in the mail app.

It is very limited at present. My laundry list is quite extensive:

You may say cleaner and simpler is usually better and that a lot of Outlook users could do with a bit of a simpler interface, but the strength of Outlook is that it’s deeply customizable. There is almost nothing mail or calendar-related that it can’t do, provided you know where to find it, particularly now we have the Ribbon interface. Metro kills all that.

I also have a basic issue with the interface design. Everything in Windows 8 Metro, including Mail, is flat. Whilst I like white-space, there are no drop shadows and borders help me separate elements on the screen. It’s like after 30 years of interface design Microsoft has gone back to Notepad.

What is worrying is the productivity loss. In Windows 8 Metro  I have to open a mail app, a calendar app, a to-do list app, a reader app, and a contact app in order to do the same thing I can do from one Outlook screen in Win7. And I am not a necessarily a fan of Outlook.  I don’t know anyone who gets so little mail that this simple interface will be sufficient

The answer, of course, is Touch. Window 8 is using the Metro UI built for Windows Phone 7. It’s all about touch screens, everything geared toward operation by fat fingers on glass. Tablet PC’s. For that, the flat, white space and large target area for stabbing digits is essential. I’m just not convinced the one-size-fits-all is appropriate for every device and every user. Which is why the corporate clients are getting the Metro By-pass edition.

Microsoft has not yet released a Windows 8-specific version of Outlook, the business-class e-mail client that is part of Office. A beta version of MS-Office 15 is expected this summer. Expect is to run on a conventional desktop. AJS