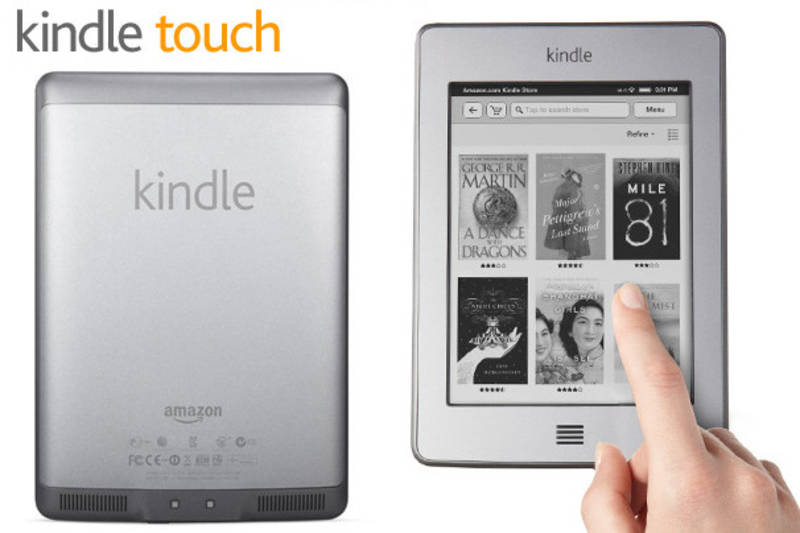 The original Amazon Kindle Touch was the first e-ink reader device to break break the mass market. It’s successors, Kindle 2 and 3, are the best selling e-readers in that market. Now the Kindle Touch crosses into the tablet market as a touch-enabled e-reader. Amazon is offering the device using the familiar two price-point scheme: the $99 ad-supported model and $139 without ads.

The Kindle Touch is lighter and shorter, but thicker than the Kindle 3 making it a little easier to hold. Kindle Touch has headphone and micro-USB jacks at the bottom, a simple press-key power button (not the slide button of previous models), which is small and rigid enough not to get pressed by accident. The Kindle Touch ditches the black buttons of the Kindle 3 and has just a single button on the face. That’s it. No page turn buttons, nothing.

Controlling the Kindle Touch is via the touch screen that supports swiping and pinch-to-zoom. You swipe anywhere in the centre to flip pages; swipe right to go to the next page, and swipe left to go to the previous page. The other key gesture is swipe up or down to access next and previous chapters. It’s logical but it may take some getting used to and a little more precision in your gestures. The Kindle Touch uses multi-touch technology, so you can change font size using the standard ‘pinch-to-zoom’ gesture for zooming in or out.

A narrow strip along the left edge of the screen flips back to the previous page, and a strip along the top brings up the full array of controls – a menu button, a search box, quick access to the Kindle store, and a Back button.

If there’s a problem with the touch screen, it’s that it is so responsive. You only have to touch your finger to it, and the page turns. The screen may look a bit more reflective, though Amazon claims it is the same type of screen (6-inch E-Ink Pearl) as the Kindle 3. It shouldn’t be any worse to use in daylight. Indoors, the Kindles go from strength to strength.

Along the bottom of the screen you have the fonts button for changing font size and margins, the Go To button for navigating chapters and bookmarks, and a Sync button. This manually invokes the synchronisation with your other devices across Amazon’s servers (normally an automatic function).

Look-up is the defining feature of the Touch. Come across a word you don’t know and it’s easy to pop up the dictionary, the old a two-line strip at the top or bottom of the screen is now expanded to five full lines of text, which will be good for most definitions.

Highlighting quotes and interesting passages is a matter of holding your finger on the screen for a moment to invoke the highlighter then drag it across the text.

X-Ray Vision and the Web
Kindle is now pushing the e-book format with extra functionality. Hit the x-ray button and you get a listing of major characters and terms in the book, with a kind of time line strip showing where it occurs through the book. Known terms show up with the beginning of their Wikipedia article which you tap to access using the built-in browser. Touch support means you can tap links and images and scroll by swiping up and down the screen. Pinch-to-zoom works the same as on smart phones and tablets.

The browser is hidden away under the ‘experimental’ menu, I suspect because the Touch is still an E-ink reader, still not ideal as a web device.

Keyboard
The Kindle Touch has a very clear, on-screen keyboard, much better spaced than the Kindle 3 keyboard. Sadly it has the blight of many on-screen keyboards, when you want to use a comma or exclamation mark you have to switch to the numbers and symbols layout and wait for the sluggish e-ink screen to refresh.

In Use
In use, you can silence the page-turning sounds and settle down with a good e-ink screen and no distractions.

Quoted battery life is 2 months, even with the touch capability, but this is difficult to verify as it comes fully charged out of the box and I haven’t heard anyone run flat yet. This is the joy of thrifty e-ink screens.

Measuring Up
The Kindle Touch has advanced the feature set into the tablet arena but it’s the limits of the e-ink screen that hold it back as a serious competitor to the iPad and other tablets.

The US has a clutch of touch-capable e-book readers, not all available Internationally. Barnes and Noble has the Nook Simple Touch (US only), while the Kobo Touch is available over the Internet and in territories beside the US and Canada; the UK, France, Hong-Kong, New Zealand. Prices vary widely and few are even close to the cheapest Amazon price. But then there’s the lock-in to the Amazon ecosystem. If you can live with that then the Kindle Touch is up there at the head of the e-reader league. AJS