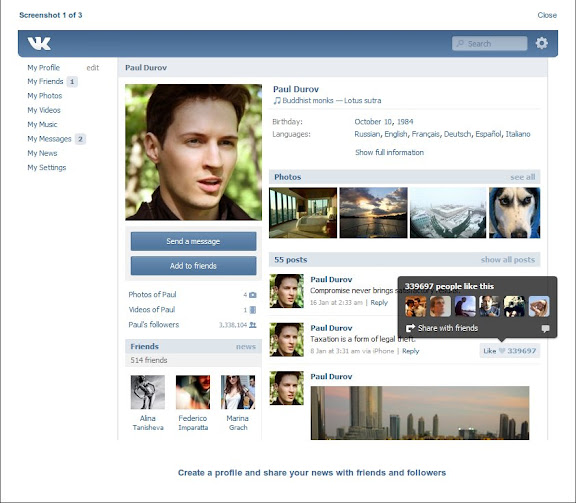 VKontakte (Internationally branded as simply ‘VK’) is the most popular social network service in Russia, Ukraine, Belarus, and Kazakhstan. Unless you live in those territories, you probably never heard of it.

If it looks startlingly familiar in design and functionality, you won’t be surprised to hear that VKontakte is often described as a Facebook clone, with a similar concept and a comparable business model. VK not only sports an interface highly reminiscent of Facebook, but incorporates media features that make it more like YouTube, Pandora, and MySpace rolled into one. 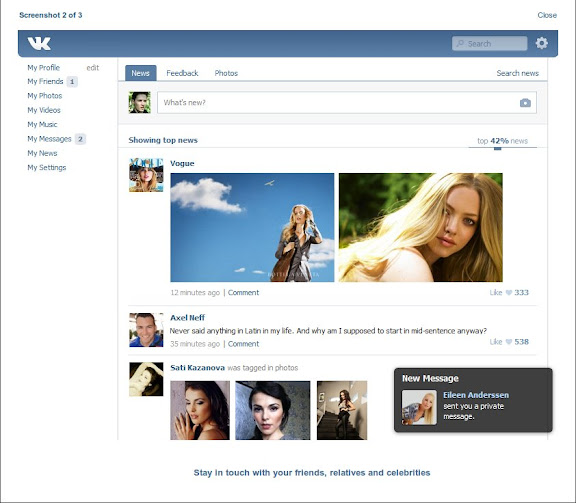 VKontakte (VK) is not nearly as large as Facebook in membership, but is the largest European social network with more than a 100 million active users. It has remained one of the top 50 most popular sites in the world for several years, and is Russia’s fourth most-popular site altogether.

“VK is a networking project that helps people express their opinions and find an audience. You can communicate with a broad community of interesting people or keep in touch with friends and family.”

Like Facebook. Which is understandable, as it does what Facebook does. The fact that it’s based in Eastern Europe explains why it hasn’t been sued by Facebook. Suitably liberated, it has been able to build a remarkable market presence:

The stated aim of VK is to remain the fastest, most modern and aesthetically pleasing means of communicating on the Internet. But it looks like Facebook.

Pavel Durov, the outspoken founder and CEO of VKontakte is understandably disappointed that the site’s initial public share offering (IPO) has been indefinitely postponed, owing to the chilling effect of the Facebook IPO, which looks like the worst performing IPO of the last decade. AJS