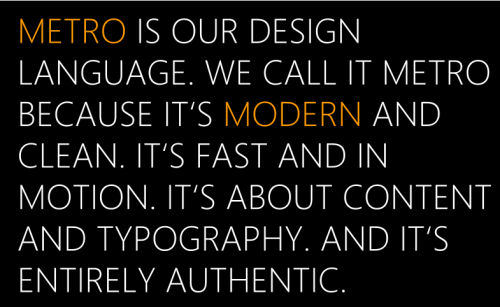 Uh-oh. Dear Microsoft has gone off the rails again. Just when you thought the confusion over the lexicon for Windows 8 had reached its’ peak, things just got a whole lot worse.

Because Metro isn’t Metro Any More.

This month (August 2012), Microsoft contacted developers, customers and employees to stop using the Metro name. Apparently German software company Metro AG has an International trademark on the word Metro. This could get legally very expensive and court proceedings actually delay the launch of the entire Windows 8 shipping in October. Oh dear.

You would think that a legal team the size that Microsoft employs would have bothered to check this out, oh, two years ago? But no. Just before the RTM (Release to Manufacture), it appears that Microsoft is planning to use Windows 8 or Modern UI as a replacement term.

Windows 8 is likely to be the replacement term for the Metro design language used in the Windows 8 operating system and other Microsoft products. No danger of confusion there, then.

After all that fuss about ‘Metro apps’ since way before the developer conference and Windows 8 Developer Preview. Metro-style apps or Metro apps use the fundamentally different user interface, created with the new Windows Runtime platform using a variety of programming languages. A number of them – Microsoft’s own and many third-party developers’ – are available as free or commercial apps in the new Windows store. Unlike conventional desktop apps, these have limited access to hardware and Windows 8 resources, making them (allegedly) cross-platform and (allegedly) more secure.

Microsoft is now insisting these be described as either as Windows 8 apps or Modern UI apps in the future. It’s already prevalent on Events listings and MSDN development blogs.

This change of terms that has sprung up in all the Microsoft literature, including Modern UI, is not yet officially confirmed by Microsoft, other than to say that code names are being dropped in favour of commercial branding. There we were thinking that Metro was the commercial branding. Love it or hate it, Metro is snappy and memorable. “Windows 8 Applications”…?

This doesn’t clarify what happens to the term Metro Interface – the Windows 8 start page is usually referred to as the Metro Interface. With Windows 8 you boot into that startpage displaying a selection of Metro app tiles.

So if you thought Windows RT, the specialised version of the operating system for ARM hardware, might be confused with WinRT, Windows Runtime…

Any resemblance of Microsoft to an Italian cruise ship getting lost and running aground is entirely coincidental. AJS