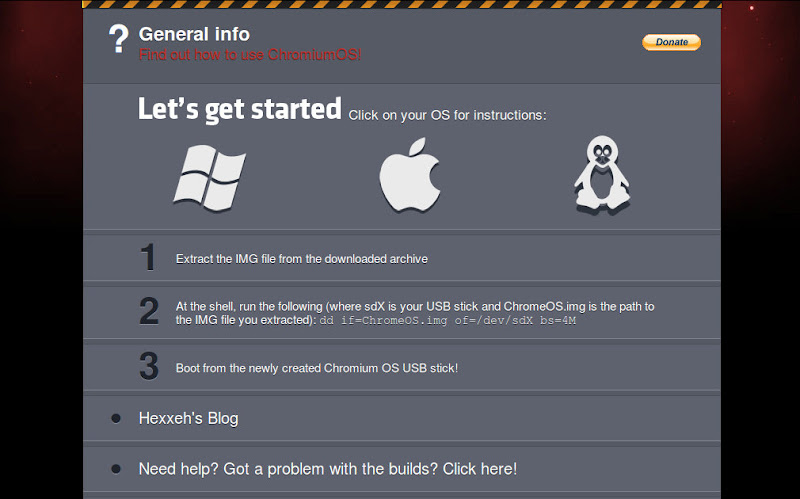 Following our look at Chromium OS in Part One, and trying it in a virtual machine using VirtualBox, we’ll move on to use the standard Vanilla build of Chromium OS from a bootable USB stick directly on real hardware without installing anything to the hard drive.

Hexxeh provides pre-built, bootable disk images for use on standard USB memory sticks. The image is supplied as a .img file, which needs to be written to a minimum 4GB capacity device. The Vanilla build is refreshed every day, so you can test the latest changes. 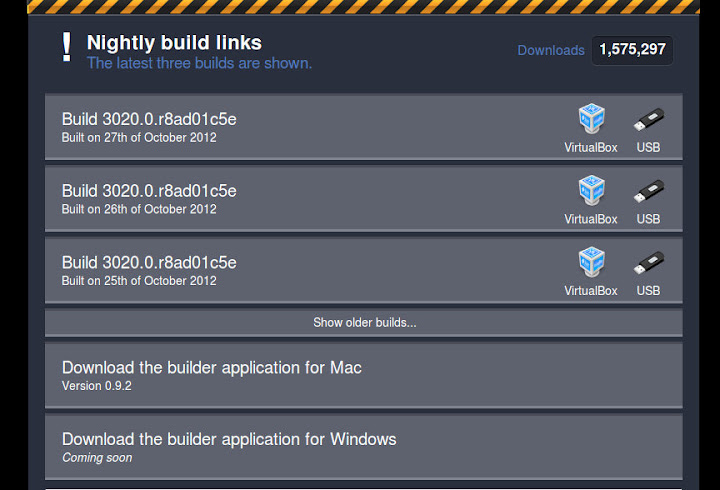 You will need to download the disk image, a standard .zip archive file with a download size of just over 300MB. Hexxeh recommends installing it on a USB storage device that is at least 4GB. from the main page. The Nightly Builds section containing the link is halfway down the page. Unzip the archive and extract the disk image to a folder on your hard drive.

The method for writing a Chromium OS disk image to a USB flash drive differs for each operating system. Hexxeh supplies a utility for Mac OS X to automate the entire process. For Windows, Hexxeh recommends you use Windows Image Writer.

Linux users may think that the Startup Disk Creator tool would work, or at worst, Unetbootin would write the image to a USB stick, but, for technical reasons beyond this article, they manage only to write non-booting images. Linux user will have to use the dd command at the command line to write the disk image to a USB flash drive. The dd command given by Hexxeh works perfectly:

where sdX is your USB stick and ChromeOS.img is the path to the IMG file you extracted.

Just make sure you understand and don’t randomly change parameters as the dd will trash your hard drive if you feed it the wrong parameters.

After you write the image to a USB thumb drive, you can get a complete Chromium OS experience by booting from the device.

You should be able to boot from a USB stick on the majority of modern PC’s which natively support boot from USB in the BIOS. You may need to enable this and set USB as the first boot device in the boot menu order. On most computers, a function key such as F12 activates a boot device selection menu during startup. If not, you may need to hold F2 on startup to get into the BIOS to manually configure the boot device order.

I tested Hexxeh’s Chromium OS Vanilla builds on a couple of machines. My old Dell 1505 and a new Thinkpad refused to start. My Dell netbook was much happier, booting straight from the USB stick to the Chromium OS initial set-up wizard. This is a net-dependent OS so it expects you to have a Google account and a network connection; without both of those, you’re going nowhere. It should walk you through the steps of setting up your WiFi network and user account. For subsequent sessions, you will boot straight to the login screen, thence to the re-vamped ‘Aura’ Chromium OS desktop.

Except… on the netbook, the troublesome Broadcom wireless adapter isn’t recognised and you can’t easily get drivers and firmware off the net – even if you then plug an ethernet cable into the router and run a wired connection. I will tackle the wireless issue another time. If you hit serious hardware problems, you might to try the Lime build which supports a wider range of hardware. Otherwise the Hexxeh Vanilla build works mostly as expected on the netbook, barring a few hardware-related problems; click-and-drag operation really needs a dedicated mouse over a trackpad. There’s also some reliability issues with suspend and resume.

A Note on Performance
Booting from a USB drive is usually a lot slower than booting from an internal hard drive, so Chromium OS may appear tardy compared to a native Chromebook. Anything running in RAM is respectably quick, but you do get some stutter when things are written to the USB temporary storage. A fast USB device will make a difference.

In Part Four, we’ll take a look at the capabilities of Chromium OS in use. AJS