At one time, Microsoft used to release Service Packs for it’s software – Windows XP had three, versions of Windows Server would have a couple each. As Windows Update came to support more frequent and regular patches, Service Packs fell out of favour. Which is why Threshold 2 is a return to an old idea; it’s the first major update to Windows 10, a large, tightly packaged update to the original Windows 10 which was codenamed ‘Threshold’. In effect, a Service Pack and a feature release combined.

Some of the changes are good – product activation, coloured window title bars, Skype integration, improvements to the Edge browser – but some are not so good – there is advertising in the Start menu.

The Threshold 2 service pack is identified as version 1511, released in November 2015 and was delivered through Windows Update. So what’s in it?

While you could always upgrade to Windows 10 from 7, 8 or 8.1, it wasn’t always so easy to clean-install from scratch. Threshold 2 will now let you wipe and clean-install a machine with Windows 10 and allow a valid Windows 7, 8, and 8.1 product key to  activate. The activation checks are all carried out using Microsoft’s licensing database in the Cloud, so it can identify from the digital fingerprint made under 7, 8 or 8.1 if that PC was eligible for the upgrade. 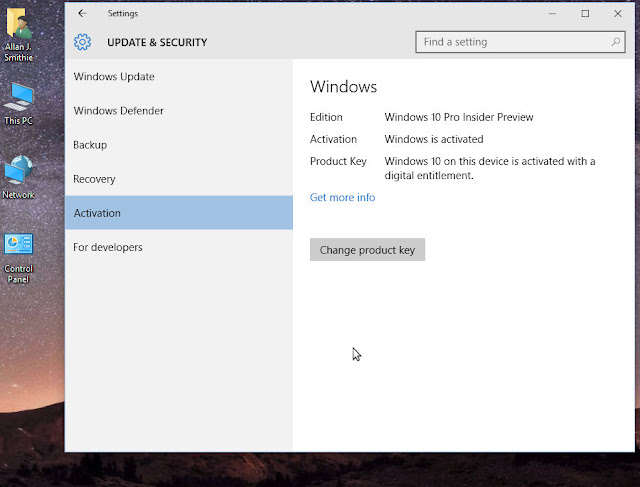 So much user control was cut with the new Modern UI in Windows 8, you couldn’t even change the colour of some screen elements without executing some ugly hacks. Now you can just go to Settings, Personalization, Colors and enable “Show color on Start, taskbar, action center, and title bar”. Your chosen accent colour will be used for title bars. It’s a small gesture toward individuality, but now you can produce your own hideous Fischer-Price colour scheme instead of using the default blandness Microsoft gives you. 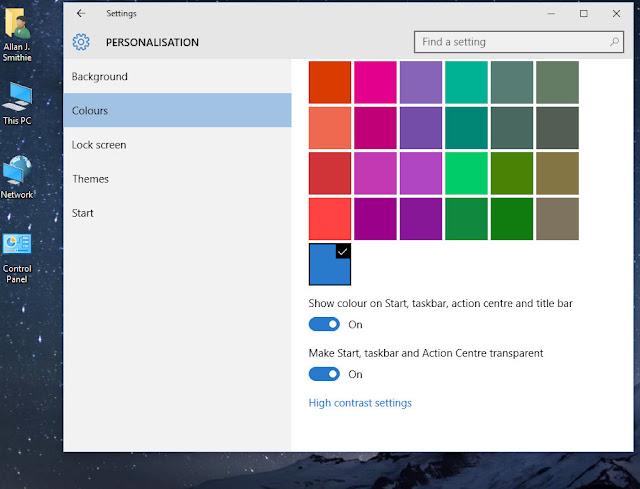 App Ads in the Start Menu

We all wondered how Microsoft would square the cirlce of a free Windows 10 upgrade. It starts here. The Start menu now shows  “occasional suggestions” for recommended apps from the Windows Store. It’s all about driving traffic to the Store, from the Start menu, however noisy and unwelcome that is for the captive audience.

There is a way of disabling this obnoxious ‘feature’; go to Settings, Personalization, Start, then  disable the “Occasionally show suggestions in Start” option. 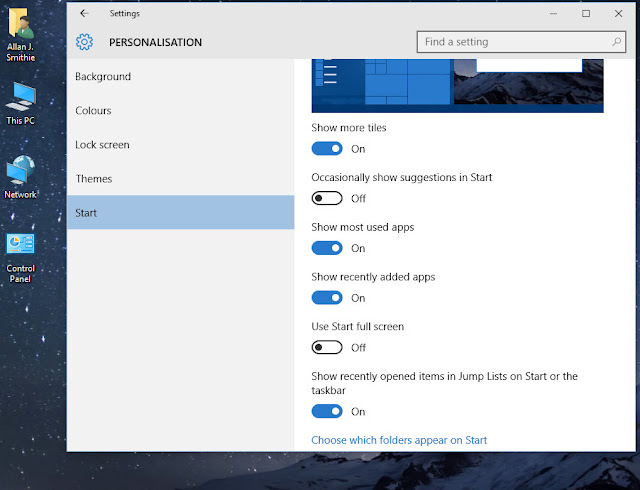 Windows 10 has built in tracking, as long as your device has GPS or location services enabled – allowing it to dial-home its location periodically; Microsoft’s servers will hold a record of your device’s location. Go to Settings, Update & security, and activate  now  “Find My Device”. 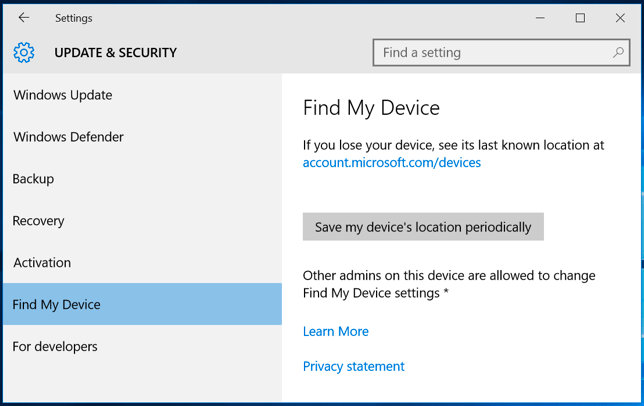 The Edge browser has more features – although it’s still not finished. There’s more support for HTML5, CSS3, and ECMAScript (think of it as a superset of JavaScript and other scripting languages).

The two things you’ll see are:

The Edge browser still doesn’t support browser extensions and won’t for a while. Progress seems to be quite slow, but the good new is Edge can now ‘Save target as’ without you needing to use an inferior browsers, like, say, Internet Explorer. 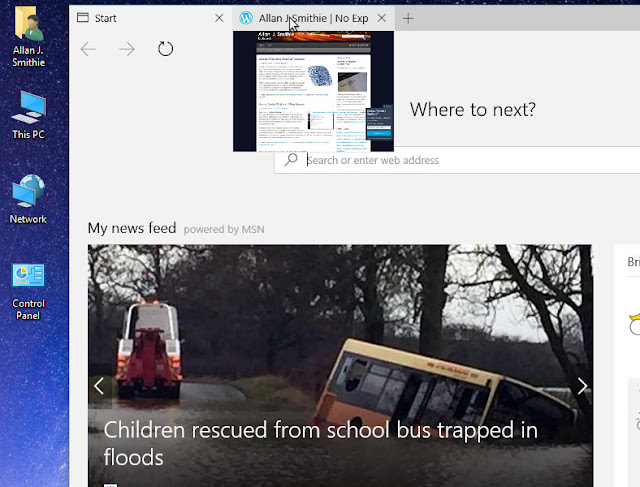 Skype Video, Messaging, and Phone now use the Skype service for video calls, text chat, and telephone audio calls, replacing the huge clunky Modern UI Skype app from Windows 8. You can still use the standard Skype desktop app if you want.

Windows 10 also includes Sway. This hybrid Office-style app has been out for a while now, and it’s still difficult to describe exactly what it is; somewhere between Word, Powerpoint, and a blog, Microsoft describes it as a tool to “create and share interactive reports, presentations, personal stories, and more.” It’s intriguing and confusing in equal measure, to we’ll look at this one separately in another post. 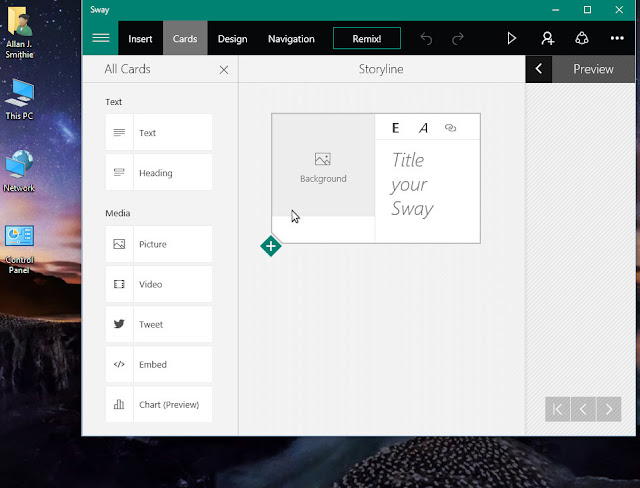 Microsoft has re-enabled the option to install Windows 10 apps to another drive, for example, an SD-card on a tablet or laptop. Why it disappeared is a frustration and a mystery, but it’s now back under Settings, System, Storage, allowing you to select where to save new documents, apps, pictures videos and music. It will give you the choice of physical drives, OneDrive and Office 365. 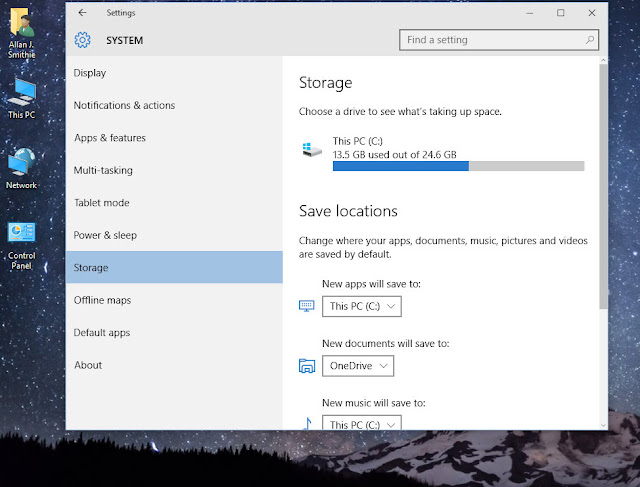 There’s also a setting for the storage of offline maps right below this under Settings, System, Offline maps.

The limits have been lifted on how many apps and tiles you can have in the Start menu which now supports up to 2048 tiles, as if 512 wasn’t enough. Apps and tiles can now have jumplists, and although the odd mixture of context menu styles have been improved and made more consistent, there are still differences across the Start menu and the desktop, so no outbreak of unity yet. This is the issue with slamming Modern UI and conventional Windows desktops together, the fall out is going to take a while to clear.

I realise this is turning into some long list, and there’s still a lot to cover, so we’ll cover more of Threshold 2 in the next post. AJS