With Windows 10, Microsoft has disabled System Restore by default on a large number of PCs and other Windows devices. System Restore is a kind of backup tool creating snapshots of system files that you can restore if a problem occurs.

Getting Windows 10 to run on SSD’s in laptops and tablets with as little as 16GB of storage is a tough ask, so System Restore popping up to gobble hundreds of megabytes at a just time isn’t practical.

With a lot of user data backed up to the Cloud, performing a system refresh from Windows 10’s PC reset feature is not the same inconvenience of  a full system restore. But if you have the storage space, System Restore is a useful way of keeping good configurations and doing partial roll-backs of Windows to earlier states. Get a bad application, incompatible updates, malware attack, perhaps a registry error, System Restore can wind back to a known good configuration quickly. If it’s turned on.

Windows 10 still contains the  System Restore tool, but it is disabled by default. With other system restore tools around, Microsoft was aware of the need to reduce the disk space that the bulky System Restore snapshots demand. But you can still enable System Restore on Windows 10.

Check your total storage space available and the total used.

In the course of several iterations of restore points, the tool can use up several gigabytes of space. On cheaper devices, you could run out.

System Restore is a pre-emptive tool.

Creating a restore point on a broken system doesn’t fix anything. It’s not a point you’d want to roll back to in future – unless you’re experimenting with fixes that could make things worse, I suppose. Getting back to a Windows configuration that’s less broken might have some value.  Remember that System Restore starts taking snapshots from the time you enable it. It can’t fix any existing problems if there are no previous snapshots to roll Windows 10 back to.

How to Re-Enable System Restore

This option is only available in the Control Panel, not the new Settings app.

By default  system protection is “Off” for your Windows 10 system drive and any other drives in your machine. 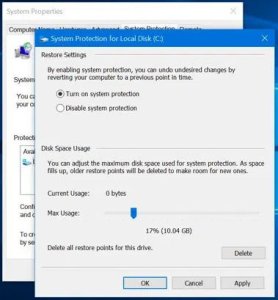 To Roll Back to an Earlier Restore Point

Go back to this same “System Protection” panel. Select the “System Restore” button. It is only enabled if there are restore points to use.

If Windows can’t boot normally, but  you can boot into Safe Mode, then you can run  System Restore, or launch it from  the “advanced startup options” recovery environment.

Note that both creating and rolling back to a restore point can take a while. It’s not a thirty second fix. Depending on the issue, it may not even be a fix if the known good configuration you’re looking for isn’t in a particular restore point. You may need to roll back through several restore points to get past a problem that has taken a while to surface.

You may also want to keep a more descriptive log of the state of the Windows  setup at the time of each snapshot.

Keep in mind that System Restore remains a sledgehammer option. It rolls back the state of the entire Windows configuration. It does not address single problems.

You might be better off tackling specific issues. Say a problem emerges after a recent Windows update, you try uninstalling items in Windows Update, or revert to a previous build of Windows. .

If Windows is throwing file corruption errors, a better place to start is with the System File Check (SFC) command to scan your system files for problems and automatically repair them.

Programs or hardware drivers which appear to lead to problems can be uninstalled from Applications and Programs in  Control Panel or Device Manager for drivers. There’s some complexity in managing drivers by this route, so proceed carefully.

If all else fails, the “Reset this PC” tool in the Settings app will wipe the Windows 10 system configuration back to its factory-default settings, just as it was when you switched on for the first time. While this keeps your personal files, everything else you installed and configured will have to be re-done. And best let Windows Update do its thing before you set about re-creating your working configuration by hand. AJS